“With the right music, you either forget everything or remember everything.”

“With the right music, you either forget everything
or remember everything.”

During our childhood we sing the ABC’s to remember the alphabet, listen to nursery rhymes for basic understanding of what’s good and bad, and in many cases share music to connect with others.

As music extends past our childhood and into our adult life, many people go to concerts to feel joy and become one step closer to the artist they love. Others turn up the radio as loud as possible to keep their usually mundane commute interesting. Some invite people to the dance floor to connect and have a good time.

There is something about music and its universal language. No matter where you go, it is always present.

Imagine sitting in a coffee shop and hearing a song you haven’t listened to in years; you can recall the chorus, hum the tune, and in some cases sing every word. For people with dementia, much is the same. It allows them to reconnect with their past, even if only for a moment. For them, music is vital, and it could be one of the last pieces of their history they haven’t forgotten.

I had the privilege to talk with Evie Straus, MT-BC/L (Music Therapist-Board Certified/Licensed). She works with senior living residents to improve their overall health and wellbeing. During our Q&A, She dives deep into the goals and benefits of music therapy.

Q: Why does music last within the brain while other memories are lost?

A: Our connection to music is typically the strongest during our teen and young adult years because those are the years of self-identification, self-expression, and emotional development. Our memories are often connected to music because of the structure of our brains; the brain thrives on structure and rhythm. That’s why when an older adult can no longer remember what day it is, they can still remember all the words to “You are My Sunshine.”

Q: What are the benefits of music, specifically for people with dementia?

A: There are so many benefits to using music to connect with older adults, but it really depends on what the resident needs. Sometimes I will pass by a resident in the hall that maybe I have been working with for a goal of memory recall and reminiscing. 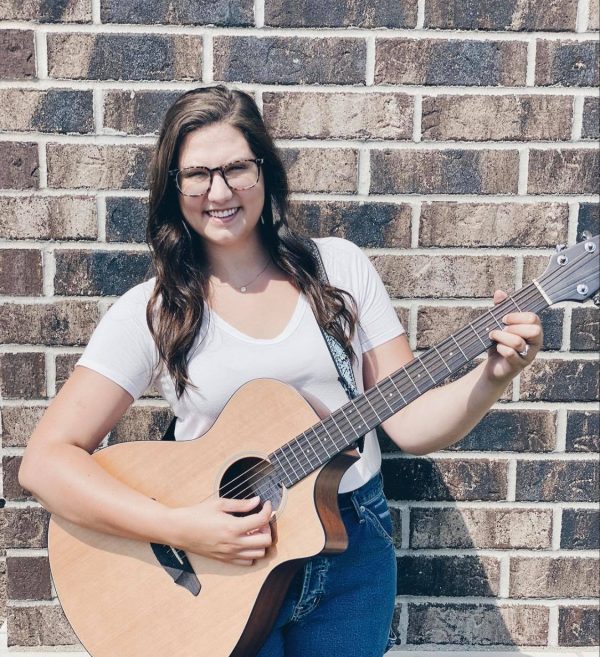 But as I pass by, I notice the resident is agitated and anxious. So, I begin singing a song I know they are familiar with and they begin to sing along. The music can help re-orient them to reality and help them remember and know they are safe. Music can be beneficial for the psycho-social, physical, and emotional needs of a resident. That is what makes music so unique because it helps the whole person.

Q: We have all seen YouTube videos of music “bringing someone back” for just a moment, is there a scientific reason why?

A: Well that takes us back to how the brain thrives on rhythm and melodic structure. Structure is a way we learn and retain. Music is different than simply speaking, the melodic structure is strong in the brain because the brain itself thrives on rhythm and repetitive melodies. That is why we often learn information to the tune of a song such as the ABCs. So, when names, reality orientation, and different memories are lost, music can be recalled because of the melodic and rhythmic triggers. Because of this, different songs trigger different memories and these memories can trigger emotions.

Q: What is your primary job as a music therapist?

A: I work to make connections through music. Before COVID-19, I was doing music groups on each floor. Each group had three main goals, increasing socialization, memory recall, working on cognition, and it also included some sort of movement intervention. Increasing socialization would often involve singing a song the group knows together. Memory recall includes residents singing songs without having the lyrics available and also recalling memories about their younger years. A cognitive intervention could be a fill-in-the-blank song. This is where you take out key lyrics of a song and allow the client(s) to fill them in with their own lyrics. A movement intervention could be using egg shakers to move to the beat of a recorded song such as “Beer Barrel Polka.” While we shake, I give the group various directions on different movements for them to do throughout the song.

An example of a fill-in-the-blank song would be taking out words to the song “I’ve been Working on the Railroad.” You can take out the word’s “railroad” and “captain” and the phrase “Dinah, blow your horn.” Then you give the residents a chance to fill in their own jobs that they have worked, such as working in a diner or in the military. This allows the residents to recall the jobs they worked and when. Some would remember a job they worked in high school while others would name the jobs they worked as adults. For the last phrase of the first verse I will often put a resident’s name in and change the lyrics. So, at the end you are singing “Evie go to work.” The group often finds this funny and this improves camaraderie and socialization.

I also facilitated two sensory music groups for two different floors. When an older adult has advanced dementia, a larger floor group might be too much stimulation for them. These sensory groups had a maximum attendance of 6 residents that I chose for the group. Most of them were non-verbal but responded to music such as opening their eyes, holding my hand, and humming. In these sessions I included tactile, auditory, and sight stimulating interventions. One intervention for auditory stimulation was using an ocean drum in their lap and singing “My Bonnie Lies Over the Ocean.” The goal of this intervention was having the resident move the drum themselves. For tactile, I played a recorded version of “I’m Forever Blowing Bubbles” by Doris Day for the residents and blew bubbles for them. The goal of this intervention was that the residents interact with each other and the bubbles by popping them.

Q: Not including names, have you seen a senior be positively impacted by music therapy?

A: I have worked with a resident who would often have episodes of high anxiety and they would begin crying and become inconsolable. This resident knew me and that I would work with them. They would often sing and reminisce with me about their younger years. When I would observe the resident wandering the hallway crying, I would stop the resident and ask them if they wanted music. If they said yes, I would begin with their favorite songs such as “You are My Sunshine” and “In the Garden.” My relationship with this resident allowed me to help ease their anxiety and redirect them. By the end of the session, the majority of the time, the resident’s affect was bright and they were no longer crying.

Q: Can you explain how music can connect families with their loved one who has dementia?

A: Often when someone has dementia, it isolates them because they do not know what is happening or why they had to move from their home. Singing together and listening to music can help them connect with their families in ways they can’t while talking. Music connects and we all have memories that are associated with music. When someone with dementia is able to reminisce about their memories this often redirects their thoughts and brings them back to the moment. Whether or not they are oriented to that moment and time is not important.

Q: What are some good resources for family members that may want to try music therapy?

A: Music therapy can only be provided by a board-certified music therapist. However, families can use music to connect, try singing songs you know were popular during their twenties such as music by Hank Williams, Johnny Cash, and Doris Day. A wonderful book called “Music, Memory, and Meaning”, by music therapist Meredith Hamons, is a great resource. This book explains different ways you can use music to facilitate conversation between family members and the resident, giving various examples with many songs from the 1930s-1950s.

Q: Is there anything you would like the general public to know about music therapy?

A: Music therapy is an established, allied healthcare profession that uses music interventions to accomplish individualized goals within a therapeutic relationship. Music therapy is done by a credentialed professional who has completed an approved music therapy program. A music therapist assesses the strengths and needs of each client and uses music to facilitate interactions such as singing, moving to, and/or listening to music. Research in music therapy supports the effectiveness in many different areas such as physical rehabilitation, increasing quality of life, and providing emotional support for the client and their families.

The official definition from the American Music Therapy Association:

“Music Therapy is the clinical and evidence-based use of music interventions to accomplish individualized goals within a therapeutic relationship by a credentialed professional who has completed an approved music therapy program.”

For more information on music therapy in general, visit musictherapy.org.

Thank you Evie for providing the WalkWise family with great information regarding Music Therapy!